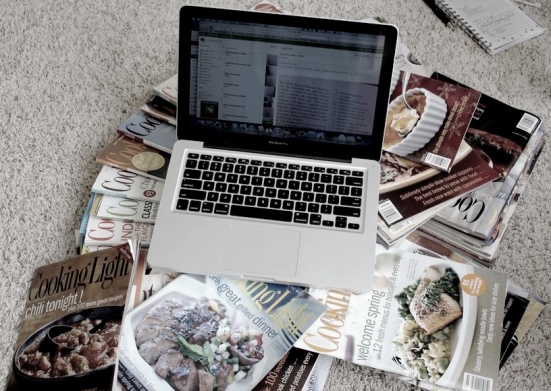 A number of you already know that I am on a slow and deliberate path toward simplifying my life (you may even have joined me in the quest for less!).   Some of you may also know that I’m a big fan of Evernote (a cloud-based filing system that I’ve reviewed in my top ten apps for iPhone and for iPad– I know it’s available for Android systems as well and I would expect it to be equally awesome there).  However, most of you probably do not know that I have a stash of probably 50 plus Cooking Light magazines that I just can’t bear to get rid of because they have SO MANY wonderful (and healthy) recipes.  It’s okay, though, because two of my favorites are going to come together AND take me that much closer to my goal of simplifying (yay, two for one again!).  If you’re confused about which two I’m talking about, look at the title of the post, then rejoin the rest of us below.

Today I have been spending my time flipping through my stash of Cooking Light magazines finding my favorite recipes, snapping pictures of them, and uploading them to Evernote.  After I’ve finished the magazine, I put it into a pile to donate to the women’s shelter, and I take a nice breath as I inch that much closer to “less.”  Then, I move on to the next.  Because I have such a stockpile, this process will take me awhile; so, I would recommend you do this as you get new magazines rather than 10 years later like me.  However, this isn’t hard to do; you can do it too.

If you don’t currently use Evernote, go to http://evernote.com and sign up for a FREE account.  The rest of you know the drill… so, open up Evernote and let get started.  I found it easiest to do a little prep work on my computer before I began uploading my pictures.  It works either way (I know because I also did it by uploading first), but I found planning ahead to be better in this case.

1.  Create a new notebook called “recipes” or “cooking light” or “fred” or whatever you think will work for you to remember what you put in it (I would vote against “fred,” but do what works for you).  You will find the option to create a new notebook by clicking on the little green arrow to the right of the word “notebook” on the left sidebar.

2.  Create any new tags you think you may need.  For example, I made the tags “cooking light, July, December, 2002, 2004, etc” because those are the years and months I’ve entered so far (like I said it will take me awhile, but then I can get rid of the magazines!).  These tags matter a lot because Evernote is searchable, meaning that if you look online for a recipe and it says it was in the July 2002 issue of Cooking Light, you want to be able to search Evernote for it.  Likewise if you want to be able to find any recipes containing “chicken,” add that as a label.  You are creating  your own online database of recipes you love (or hope to love but have never actually tried).  Similarly to notebooks, you will find the option to create a new tag by clicking on the little green arrow to the right of the word “tag” on the left sidebar.

3.  Now you are ready to upload pictures.  I did this all with my iPhone, but you could also take the pictures with whatever camera and upload them to Evernote using your computer.  If you are doing this on your computer, create a new note and title it.  Next, go to the body of the note and click on the paperclip icon in the menu bar at the top of the note (if it is grayed out, just click in the body of the note and it will reappear as an option).  When you click on the paperclip (attachment icon), you will be given the option to upload any file from your computer (you can even upload multiple at once to attach to that note).

Using the Evernote app on your iPhone, tap the + button, then snapshot (or camera roll if you already took the picture).  This will attach your photo to your note.  Tap where it says “Untitled Note” and type in the name of your recipe.  Next, tap on the “i” at the top, which will bring up options for which notebook and tag you want to associate with your note.  I tapped on notebook and chose “recipes.”  If you inadvertently have saved your file before tapping on the “i” (I’ve heard that can happen), you can bring back the edit feature (and the cute little “i”) by clicking on your file then the icon of the little pencil at the bottom of your screen.

4.  At this point you have a choice between adding tags individually now or en masse on your computer later.  When I added tags using my phone, I tapped on tags and chose “chicken, cooking light, july, 2002, soup.”  Remember the tags are a big deal when it comes to how easily you can search for your items later.  I found it tedious adding tags with my phone when I was creating so many entries.  It wouldn’t be a big deal for one or two, but I’ll end up with way more than that, so what I found worked best was to choose the notebook they went in, then once I completed adding entries from one magazine, I tagged them all on the computer.

The beauty of adding tags on the computer is that you can hold down the command key (the button to the left of your space bar) as you click on each note and it will group all of them so you can add the same tag to a bunch at once.  For example, after I uploaded all the July 2004 recipes I wanted, I simply command-clicked on each of them, then added the tags, “July” and “2004” to all of them.  I could then glance through and pull out any other groupings I wanted to tag all the same and repeat (drinks, chicken, soup, etc.).  It was quick and easy.

I’m very excited to be getting my Cooking Light recipes organized.  It is one of my very favorite magazines and I still love getting the paper subscription, so it’s nice to have a way to cut down on the pile up I inevitably accumulate.  I know, I should be eco-friendly and only do digital, but I’m also donating them to a women’s shelter when I’m done, so it all evens out.

As for Evernote, let me know if you have any difficulties using it or need help.  I did a lot of explaining, but it really isn’t hard to do, so give it a try.  If there’s need, I’d be happy to write a “getting started with Evernote tutorial” and walk you through setting it up (they have one on their site that’s pretty helpful too).  Just let me know.  It’s a wonderful “filing cabinet in the sky” that I can access from my phone, my iPad, or my computer.    You’ll be amazed at everything you can do with Evernote (knitting patterns, gift ideas, and more!).

15 thoughts on “Cooking Light with Evernote…”